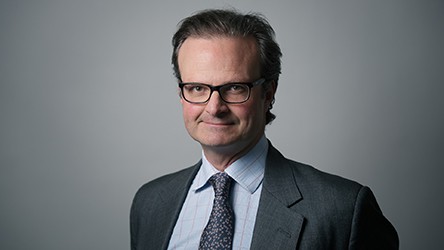 Email
"He has a first-class legal mind allied to a very charming and persuasive style."

Ed Vickers is ranked as a Leading Silk and is described as having ‘a first class legal mind allied to a very charming and persuasive style’ (Legal 500 2019). As a leading criminal barrister, he is instructed in the most serious criminal cases at Crown Court, High Court and Appellate level.

Ed regularly defends in murder and organised crime cases but his skills in cross examination, dealing with experts and analysing detail has led in Silk to a growing white collar crime practice (complex fraud, money laundering and cases before the tax tribunal). Ed is regularly asked to advise companies and individuals involved in business, tax and complex fraud investigations and to advise at an early stage on strategic decisions involving matters such as voluntary disclosure, Legal Professional Privilege and confidentiality.

Ed has appeared in many high profile cases particularly at the Old Bailey (murder and organised crime) and Southwark Crown Court (London’s fraud trial centre), and has enjoyed success in cases as diverse as defending protesters storming the House of Commons, prosecuting the police in the Tuition Fees riot in Parliament Sq, and successfully defending in the UK’s first FGM trial. With over 25 years’ experience of forensic advocacy both defending and prosecuting, Ed is instructed by a wide range of firms of City and High Street solicitors and prosecuting authorities.

Ed is a lead advocacy trainer for the Inns of Court College of Advocacy and is a member of the Scholarship panel at the Hon Soc Middle Temple. He is a Trustee of the Kalisher Trust, a charity that encourages and supports students from non-traditional backgrounds to go on to higher education and pursue a career in the Law, promoting greater diversity throughout the criminal justice system.

Ed gained great experience being led as a junior in some of the most serious homicide cases (Jamaican ‘yardie’ executions; gang-related murders and matricide).  That experience developed as a leading or sole junior in subsequent murder and other trials which included organised criminal gang related violence, armed robberies, prison mutiny and numerous cases involving stabbing, GBH and kidnapping.

Ed is often instructed in the most serious sexual offence cases, including ‘date rapes’, paedophilia and incest. He is a specialist in cases involving vulnerable witnesses, especially those with learning or mental health difficulties and is a lead advocacy trainer for The Inns of Court College of Advocacy and the Middle Temple.

Ed has been instructed in a series of high profile organised crime cases, including the Heathrow armed robbery.

Ed is regularly instructed in complex fraud cases, where focussed preparation, the martialling of material and detailed analysis of the central issues are critical.

In 2014/15 Ed was privately instructed to prosecute numerous trademark fraud cases at the Magistrates Court.

Ed has vast experience in money laundering and confiscation cases and is particularly familiar with its complexities.

Ed has some experience in this field having appeared in cases of international arms dealing and money laundering linked to terrorism.  For further information please contact Mark Bennett, Practice Manager.

Ed’s years’ of  experience in fraud cases, his track record in cross-examining experts, forensic accountants, fraud investigators and auditors and other experts, together with his ability to identify central issues and solutions allow him to bring invaluable skills to such cases.

He is available for instruction in:

Ed has extensive experience advising in appeals to the Court of Appeal. He also advises, pro bono, in capital and non-capital murder cases for death row prisoners seeking to appeal from the West Indies to the Privy Council.  Relevant cases include:

Ed is available for instruction in public inquiry work and Coroners’ inquests. His experience in treasure trove cases and knowledge of cross examining of experts and vulnerable witnesses, is well suited to public enquiry work.  Moreover, his negotiations with government ministers and civil servants on behalf of the criminal Bar and his involvement in preparing  CBA responses to government consultations has provided him with an invaluable insight into examining and challenging government decision-making.

Trustee and Treasurer of The Kalisher Trust – A legal charity established to encourage students from non-traditional backgrounds to develop advocacy skills and to assist them pursue a career in criminal law.