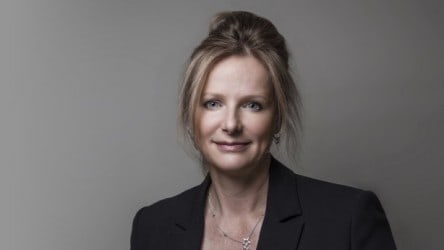 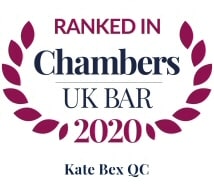 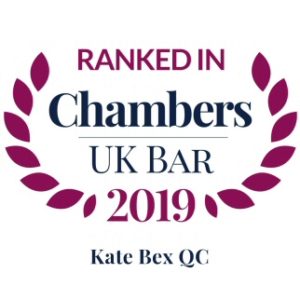 "You can have confidence in her judgement. She has an innate ability to laser through the issues and get to the heart of a case."

"Clinical in her cross-examination."

She is enormously talented, great to work with, down to earth and pragmatic. She has a backbone of steel:  Chambers UK (2016)

Kate Bex is cited in both the Legal 500 and Chambers UK.  She is a highly regarded criminal advocate who both defends and prosecutes.  Kate specialises in business crime and financial services as well as murder, sexual offences, firearm offences and large scale organised crime.  Kate also has a busy Professional Discipline practice and represents the interests of those concerned in Inquests and Courts Martial.  Kate accepts Direct Access instructions.

“She is very straightforward, clear, effective, and conscientious in her presentations” – Chambers UK (2016)

Kate is an experienced fraud practitioner: she defended in the London City Bond litigation and in the race-fixing trial at the Old Bailey and the subsequent regulatory proceedings before the British Horseracing Authority which concluded with the first Goodyear indication outside a criminal court.

She has also successfully appeared for the defence in the Court of Appeal (R v Moulden [2008] EWCA 2561) for a client charged with money laundering on a point of law concerning confiscation under both the CJA 1988 and POCA 2003 which saved her client approximately £500k.

Kate is a highly regarded defence and prosecution advocate who defends and prosecutes in equal measure in murder, sexual offences, firearms and large scale organised crime often involving drug importation.  She has successfully defended and prosecuted many cases involving multiple victims of familial sexual abuse.  Before taking silk, Kate had been on the fraud, rape, POCA, serious crime and general crime panels of CPS advocates for many years.  She also has experience of dealing with novel areas of law; she prosecuted an importation and supply of firearms by rival south London gangs involving a new weapon not seen by NABIS or the FSS before which required expert evidence on the interpretation of s.5 Firearms Act to set a precedent for future cases.

Kate has been involved in cases requiring considerable sensitivity; defending a mother in the tragic killing of both of her children whilst suffering from an undiagnosed serious mental illness and defending a man accused of sexually assaulting eight women including children in a campaign lasting fifteen years.

Kate has regularly appeared at the General Medical Council, General Dental Council, General Pharmaceutical Council, Nursing & Midwifery Council and National College for Teaching and Leadership for many years.  Kate has also been sitting as a Legal Assessor at the Health and Care Professions Tribunal Service since 2000.

Kate has appeared before the High Court for Judicial Review and in the County Court for the first appeals from a decision of the GMC’s Registration Appeals Panel.

She also defends healthcare and other professionals who face criminal proceedings arising out of their work, as well as those in other industries such as a racehorse trainer who faced proceedings brought by the BHA.

Kate has also been instructed by the General Pharmaceutical Council as independent counsel to cross examine the complainant in a rape case where the registrant was unrepresented and therefore precluded from cross examining her himself.

She has been instructed by the medical defence organisations in a number of inquests where she has represented doctors and successfully avoided criticism in the coroner’s report.

Kate represented a soldier at risk of being discharged from the Army at his Courts Martial and successfully persuaded the Board to allow him to retain his rank.

Legal Assessor at the Health and Care Professions Tribunal Service (2000)