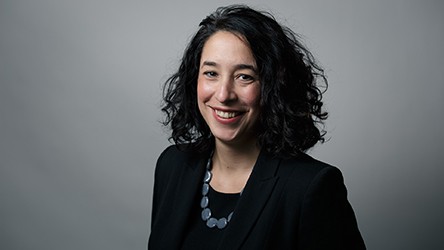 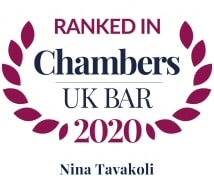 "A hard-working team player with exceptional legal skills who attracts plaudits for her ability to quickly identify key components of issues and prepare clear and concise written submissions. "
Chambers UK 2018
"She is extremely committed to cases and clients alike."

“An incredibly bright and committed lawyer who understands the nuance of her subject matter.”  Legal 500 2019

“An absolute asset” Chambers and Partners 2020

Nina practiced as a commercial litigation solicitor at Hogan Lovells before transferring to the bar where she specialises in international and domestic criminal law and inquiries. She is ranked as a leading junior in UK legal directories Chambers and Partners and Legal 500 for international crime. She was commended for her work on the Rohingya case at the ICC by the Financial Times Innovative Lawyers Europe 2019 and also at the British Legal Awards 2019.

She has extensive experience in genocide and war crimes prosecutions having been instructed in cases before the International Criminal Court, the Special Court for Sierra Leone, the UN International Criminal Tribunal for Rwanda and the War Crimes Chamber of the Court of Bosnia and Herzegovina. Her cases have been groundbreaking including the Rohingya case before the ICC and the successful prosecution of Liberian President Charles Taylor. She has been appointed to the lists of Counsel both for the defence and victims at the Kosovo Specialist Chambers.

In recent years she has focused on the investigation and documentation of international crimes particularly sexual violence and torture perpetrated in Sri Lanka and Myanmar.

In the UK, Nina defends and prosecutes in the Crown Court and practices in extradition and inquiries. She is currently instructed as part of the Core Team of counsel to the Dame Linda Dobbs Review

Nina has practiced extensively at several international criminal tribunals as a prosecutor and legal adviser: the Special Court for Sierra Leone, the UN International Criminal Tribunal for Rwanda and the War Crimes Chamber of the Court of Bosnia and Herzegovina on a number of high profile and ground-breaking cases. Most recently she led a team of lawyers to advise and assist leading Bangladeshi NGOs file an amicus-curiae brief before the ICC on the issue of its jurisdiction over the Rohingya crisis. Nina holds a masters’ degree in international public law from the London School of Economics.

She has extensive experience working with survivors of sexual violence and torture, particularly men. She has also been appointed by the UK government as a member of its team of independent justice experts in post-conflict and fragile states.

Nina is consulted by a range of institutions and non-governmental organisations to advise and provide training on a wide range of international criminal law and human rights issues within her expertise including torture, sexual and gender based violence, human trafficking and terrorism.

Nina has 16 years’ experience as a lawyer. She was called to the UK Bar in 2014. However, the 11 years she spent as a solicitor before this gives her experience which goes well beyond her call.

Nina regularly appears in the Crown Courts, defending and prosecuting. She is particularly adept at fraud and financial services work given her background as a commercial litigation solicitor at Hogan Lovells. Her clients included major UK and investment banks, insurers, global manufacturing companies, pharmaceutical, and tobacco companies.

She is comfortable dealing with exceptionally voluminous cases given her extensive litigation experience both in the City of London and internationally working on complex cases lasting several years with an attendant page count.

Along with fraud, she covers the gamut of crime, including serious violence; sexual offences; arson; perverting the course of justice; dishonesty; weapons; drugs; robbery; and road traffic. She has also assisted in preparing the successful defence of the first ever FGM case to be tried in the UK.

Investigations and Inquiries
Nina is currently part of the Core Team of counsel to the Dame Linda Dobbs Review set up to investigate whether issues relating to HBOS Reading were investigated and appropriately reported to authorities following Lloyds Banking Groups acquisition of HBOS.

A crime that offends the conscience of humanity: a proposal to reclassify trafficking in women as an international crime, International Criminal Law Review 9 (2009).

2019 – Panelist at the International Conclave on Justice and Accountability for Rohingya, organised by the Centre for Peace and Justice of BRAC University, the Asia Justice Coalition and the International Institute of Social Studies of Erasmus University Rotterdam, The Hague.

2019 – Organiser and speaker at a RLC panel event hosted by Hogan Lovells: The Rohingya Crisis: Legal and Political Challenges to International Accountability.

2019 – Speaker at the Foreign and Commonwealth Office/Wilton Park conference on Preventing Sexual Violence in Conflict.

2018 – Guest speaker on the prosecution of sexual and gender based violence crimes at international courts at a conference on Violence against Women and Girls organised by the UK Embassy, Colombia.

2014 – Expert participant at the Global Summit to End Sexual Violence in Conflict, London.

2014 – Guest speaker and panelist at United Nations Symposium on the Legacy of the International Criminal Tribunal for Rwanda, Tanzania.

2013 – Guest speaker at the 2013 Euro-Mediterranean Human Rights Conference on combatting sexual violence crimes in the Arab world in the context of the ‘Arab Spring’, Amman, Jordan.

2013 – Lecturer at American University of Paris on international criminal law.

Training Middle Eastern NGOs on the establishment of national mechanisms to combat impunity for sexual violence crimes committed in conflict.

Assisting the UN Office of Drugs and Crime in Abuja, to train Nigerian lawyers from the Nigerian National Police Force and Department of State Security on the successful prosecution of terrorism.

Nina was commended for her work on the Rohingya case at the ICC by the Financial Times Innovative Lawyers Europe 2019: [Click Here]

Nina’s work on the Rohingya case at the ICC was cited by the judges when Red Lion Chambers won Chambers of the Year at the British Legal Awards 2019.

“She provides high-level, clear and accessible advice on how to adhere to best practice.”
Chambers and Partners 2020

“She is an excellent legal drafter who develops comprehensive and in-depth arguments relating to extremely complicated topics. She is an absolute asset.”
Chambers and Partners 2020

“An incredibly bright and committed lawyer who understands the nuance of her subject matter.”
Legal 500 2019

A “seasoned professional.”
Chambers and Partners 2019

“She is very bright, has strong interpersonal skills and is hugely enjoyable to work with.”

A “hard-working team player” with “exceptional legal skills” who attracts plaudits for her “ability to quickly identify key components of issues and prepare clear and concise written submissions.”
Chambers and Partners 2018

“Very bright and extremely committed to her cases and clients, she will go the extra mile to ensure the delivery of exceptionally high-quality work. She is a barrister who confronts challenges.”
Chambers and Partners 2018

“Bright, articulate and unrelenting in getting the best result for her client.”
Chambers and Partners 2018

“She has excellent interpersonal skills reflected in her capacity to listen closely to her clients. Nina helps them to talk about topics which they find confusing or painful, or which they feel ashamed about.”
Chambers and Partners 2018

Member of UK government’s team of independent experts on preventing sexual violence in conflict, 2012 (PSVI); and a justice expert in post-conflict and fragile states, 2014 (DCE)