"reposted with the kind permission of The Secret Barrister who originally posted it as a guest blog".

On 18 December 2014, Detective Superintendent McDonald of the Metropolitan Police (MPS) declared to the media that ‘Nick’ had made “credible and true” allegations of child murder and horrific abuse against a deceased Prime Minister, current and former MPs, Peers, a Home Secretary, Heads of MI5 and MI6, and a D-Day hero and head of the armed forces. On 22 July 2019, ‘Nick’, now named as Carl Beech, was convicted of 12 counts of perverting the course of justice and one count of fraud, and sentenced to 18 years’ imprisonment. Irreparable damage was done to those wrongly accused and subjected to a deeply flawed investigation. As more of the unredacted review of Operation Midland of retired High Court Judge Sir Richard Henriques has been published, we know more about how this débacle came about. But have the lessons been learned?

This description of ‘Nick’s’ complaints was planned (Henriques [2.4.9]). DSU McDonald made his declaration without having read any of his interviews or blogs ([2.4.9 response to MPS]), which showed “gross inconsistency” ([2.4.14]).

The genesis of the “belief” directive

McDonald justified it on the basis of MPS Special Notice 11/02 “Principles of the Investigation of Rape and Serious Sexual Assault”: “It is the policy of the Metropolitan Police to accept any allegation made by any victim [sic] in the first instance as being truthful. An allegation will only be considered as falling short of a substantiated allegation after a full and thorough investigation.” [quoted by Henriques [1.21]).

The 2002 Notice was issued against a background of justified concern about the high number of sexual assault allegations being ‘no-crimed’ with little or no investigation. A 2014 Report by Her Majesty’s Inspectorate of Constabulary found that of the 1,077 reviewed decisions to ‘no-crime’ a reported rape, 220 were incorrect; in the worst forces, more than two-fifths of rape no-crime decisions were wrong ([7.70]-[7.71]). HMIC recommended that for recording all forms of reported crime – notwithstanding that only 6% of errors could be attributed to the ‘victim’ not being believed ([7.75)] —  the “presumption that the victim should always be believed should be institutionalised” ([1.31]).

Guidance for Operation Hydrant (Nov 2015), a hub which co-ordinates the investigations of non-recent sexual abuse allegations against other prominent persons and institutions in England & Wales, stated that “[t]he focus of the investigation is on proving or disproving the allegation against the suspect, and not on the credibility of the victim. Investigators will need to consider issues relative to the victim’s credibility but this should not be the primary focus of the investigation.” This injunction is contradictory, and even non-sensical when the only evidence is an accusation and a denial. The guidance was republished in this form in Nov 2016, after Henriques; it is under review, but only in Sept 2019.

Henriques’ demolition of the ‘belief’ directive

Henriques provided a devastating critique of the ingrained terminology of victimhood and belief which tainted the police’s approach to ‘Nick’ during Operation Midland [para 1.23]: “a starting point that eliminates doubt has the hallmark of bias”, striking at the very core of the criminal justice process, which “has and will generate miscarriages of justice on a considerable scale” ([1.30], [1.31]). He found “plain evidence” that “an instruction to believe complainants has over ridden [sic] a duty to investigate cases objectively and effectively” ([1.25]), and that “a major contributing factor” in the many police failures in Operation Midland was the “culture that ‘victims’ must be believed” ([2.3.8.58]).

Responses to the Henriques Review

The College of Policing commissioned from Assistant Commissioner Beckley (MPS) a comprehensive and thoughtful Review into the Terminology “Victim/Complainant” and Believing Victims at the Time of Reporting(Feb 2018).  AC Beckley observed that “[i]t is not at all surprising that, for officers and staff, “believe” and “belief” has leaked into the wider investigative environment” ([8.4]), and concluded that “maintaining a stance involving believing victim accounts, however limited, has potential to undermine the legitimacy of the process” ([8.6]).  The result was a clear recommendation from the College of Policing that whilst the term ‘victim’ should be retained, the  Home Office should amend the crime recording counting rules to remove the words “The intention is that victims are believed” to be replaced by “The intention is that victims can be confident they will be listened to and their crime taken seriously”. Training materials would then be reviewed to provide guidance on “how accounts (including initial accounts) can be clarified, tested and appropriately challenged in the most supportive and explanatory way possible” ([Beckley [8.10], [8.12]).

The Home Office rejected this considered view in September 2019, retaining the controversial wording in the Crime Recording General Rules whilst adding (in italics):

“The Standard directs victim focused approach to crime recording. The intention is that victims are believed and benefit from statutory entitlements…. This seeks to ensure that those reporting crimes will be treated with empathy and their allegations will be taken seriously. Any investigation which follows is then taken forward with open mind to establish the truth.”

The 2019 edition of the draft guidance for Operation Hydrant repeats this advice to Senior Investigating Officers, claiming, rather anxiously, that it is “entirely consistent with the approach that should be taken at the outset of an investigation into non-recent child sexual abuse and acknowledges the need to gather all evidence, both towards and away from the allegation” ([1.2.3]).

So the inherent logical contradiction criticised by Henriques is now entrenched in this ‘two phase’ approach: how can an officer be required to “believe” the complainant, and then suddenly become objective and impartial in interviewing the suspect ([1.25])?

“Any policy involving belief of one party necessarily involves disbelief of the other party. That cannot be a fair system… That is a simple reversal of the burden of proof.” ([1.26], [1.27]) “The instruction foisted upon investigators to believe a ‘victim’ perverts our system of justice and attempts to impose upon a thinking investigator an artificial and false state of mind. If a judge were to direct a Jury to believe a complainant during evidence in chief, and only to question credibility thereafter, it would constitute a most  serious misdirection.” ([1.32]).

Moreover, the ‘belief’ injunction snags on (at least) six more protruding procedural nails for the police, from start to finish of an investigation:

Henriques’ observation that “a genuine and truthful complainant has nothing to fear from a directive that prioritises investigation ahead of ‘belief’” ([1.35]) is unanswerable; a complainant is entitled to be treated with dignity and seriousness, but not to go unchallenged at any stage through probing questions.

It is inexplicable that the Home Office has rejected Henrique’s irrefutable and unqualified condemnation of the terminology of ‘believe the victim’ as impeding open-minded and impartial investigations. What greater evidence of this is required than Operation Midland?

The Rules should record plausible allegations for the narrow purposes of initiating investigations and quantifying police activity in various offence and geographic sectors. The College of Policing’s recommendation was correct: ‘belief’ is unnecessary for the Standard to be rigorous and effective. Investigative training must stress a neutral starting point, not expect officers to hold two conflicting mindsets. Otherwise mistrials will continue when police witnesses cannot defend the impartiality of their investigation under cross-examination, or refer to complainants as ‘victims’ whom they were required to ‘believe’ from the outset.

Laura Hoyano is a barrister at Red Lion Chambers, a Senior Research Fellow at Wadham College, Oxford, and a member of the Faculty of Law, University of Oxford. She represents the Criminal Bar Association on the end-to-end review of obstacles to the prosecution of serious sex offences being conducted by the Ministry of Justice and Home Office. 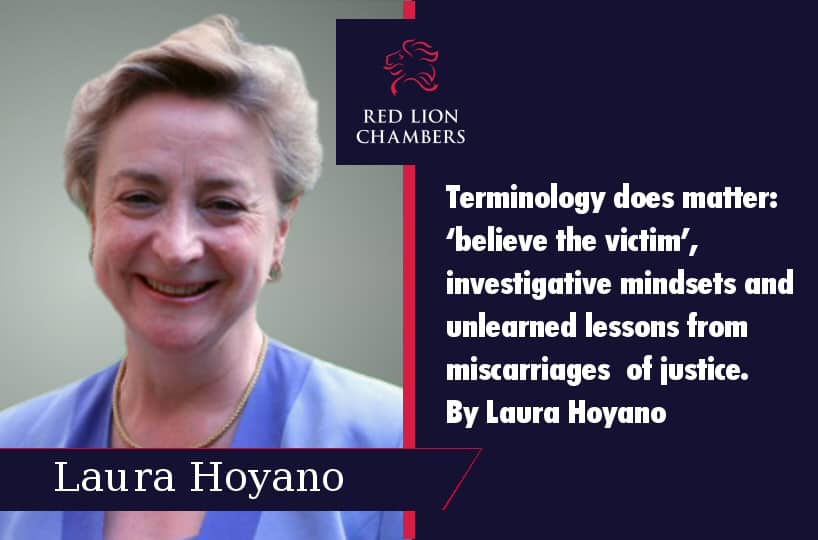